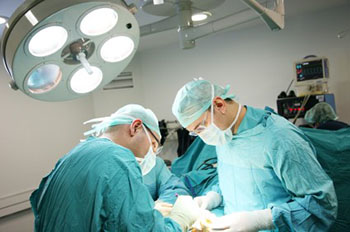 Endoscopic Decompression of Intermetatarsal Nerve (EDIN) is an endoscopic technique used for Morton’s neuroma treatment. During this technique, two small incisions are made on the foot, one to isolate the ligament and the other for visualization of the ligament via the use of a scope. Once properly visualized, the ligament is cut and this releases the entrapped nerve. This procedure is done in an outpatient setting. Patients are allowed to fully bear weight immediately after surgery as tolerated and return to comfortable shoes the next day. This minimally invasive foot surgery technique allows for faster recovery when compared to the open technique.

Endoscopic Plantar Fasciotomy (EPF) is a minimally invasive, endoscopic technique used to release extreme tension of the plantar fascia. An endoscope provides clear visualization of the inferior surface of the plantar fascia, allowing the surgeon to release tension in the medial band. Following the procedure, a sterile dressing is worn for approximately 3-5 days, then the patient is generally allowed to wear comfortable shoes as tolerated.

The bi-portal approach, using a scope which provides clear visualization for safe division of the fascia of the gastrocnemius (calf) muscle. The sheath of the scope protects the sural nerve from injury. Once adequate release is attained, all equipment is removed. The skin is closed with sutures. Post-operative management is dependent upon other procedures performed in conjunction with the EGR technique.

Endoscopic Tarsal Tunnel Decompression (ETTD) is a minimally invasive foot surgery technique used to relieve the pressure exerted on the compressed or pinched posterior tibial nerve that runs through the tarsal (Latin term meaning ankle) tunnel on the inner side of the ankle and into the foot. Anything that takes up space in or compresses the tarsal tunnel will put pressure on the nerve and cause numbness, inflammation and pain.

This procedure is performed via a small incision determined by anatomic points and geometric lines. The surgery is less traumatic to the patient than an open technique.

Ultrasound guided partial plantar fasciectomy (USGPPF) is a minimally invasive foot surgery technique that uses a high-resolution diagnostic ultrasound to accurately locate and remove the diseased tissue in the plantar fascia and then replace it with growth factors harvested from the patient’s blood. This procedure occurs through a small, needle-like device while the patient is under general anesthesia for a short amount of time. The patient is encouraged to limit the amount of standing or walking for a few days following the procedure. Regular activity is generally resumed within a few days to weeks.

Subtalar Joint Arthroereisis is a minimally invasive flat foot surgery. It is a less aggressive option used to treat a mild or pediatric flatfoot. The implant blocks excessive pronation of the subtalar joint. A small incision is made over the lateral foot, and then a small implant is inserted into the sinus tarsi, a small canal that goes up to the ankle below the talus bone. Minimal dissection allows for a quicker recovery period and a shorter immobilization time when compared to full reconstructive methods.